The normal rules for staking UTXOs apply to delegated UTXOs:

To make the delegation assignment from the Cico Core wallet, select Stake – Delegations, the Add delegation “+” button in the upper right corner, enter the Staker name (for local reference only), Staker address, Fee you agree to pay, and your Address to be delegated. Leave the default Gas settings alone unless you understand how to set these. The delegation transaction will require at least 0.9 CICO in fees and any excess will be refunded. 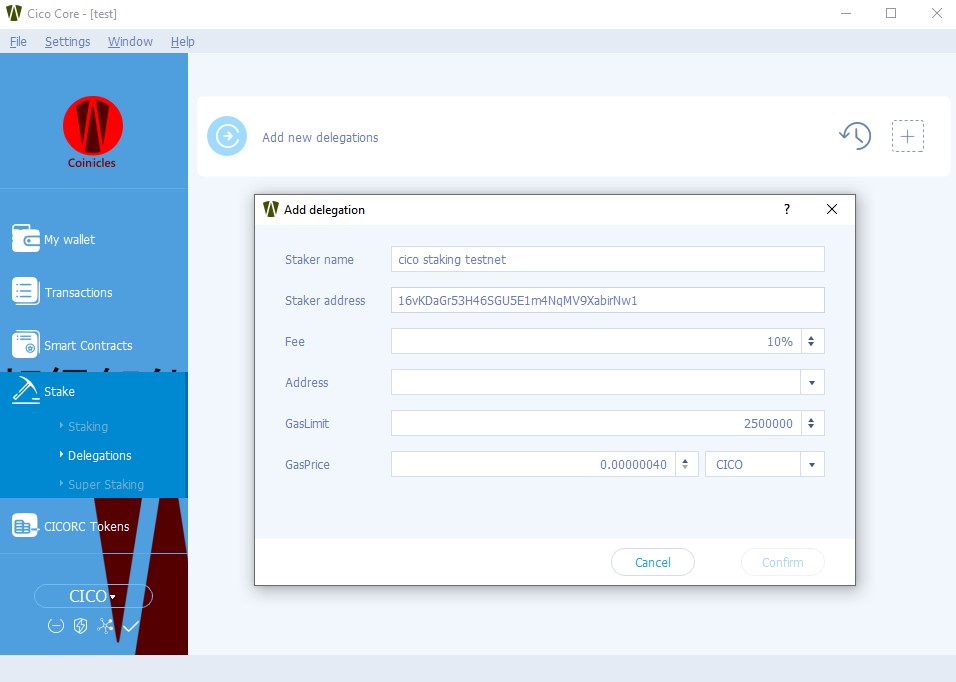 Press Confirm and Yes to send the delegation transaction.

The Delegate Address transaction is sent to a smart contract which keeps the delegation assignments and will be picked up by the Super Staker there. You can see Delegated Address block reward transactions in the wallet and also with the explorer explorer.coinicles.tech.

If the wallet is holding CICO on multiple addresses, the delegation must be made separately for each address (and the transaction fee paid for each address) so it may make sense to consolidate the UTXOs to a single address before splitting UTXOs and delegating. In this case, use coin selection to select and consolidate the addresses. Alternatively, the sendmanywithdupes command could be used to send the entire wallet balance to a new address with appropriately-sized UTXOs.

If the Super Staker accepts a delegation for a particular fee, and then the Super Staker reduces that fee (accepts assignments for a lower fee), to take advantage of that lower fee the user must delegate their address again with the lower fee set.

Delegations from a wallet may be checked on the Stake – Delegations page or with the getdelegationinfoforaddress command.

Backup your wallet to save a copy of the wallet.dat file.

The Cico Core wallet provides online Proof of Stake and can be launched and configured to operate as a Super Staker and receive address delegations.

To configure the Cico-Qt wallet for a Super Staker, select Stake – Super Staking and the “+” button to add a new Super Staker. Enter the Staker name (for local reference only, here using the first part of the address and “10” to denote a 10% fee) and select the Staker address using the dropdown. 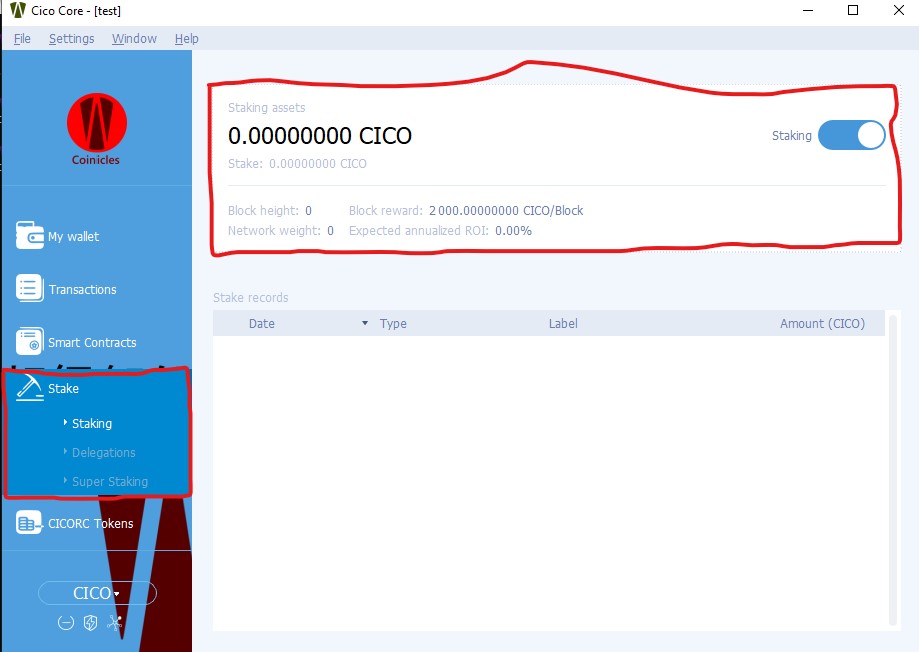 To operate as a Super Staker, the wallet must be able to check arbitrary addresses (address index), have logs enabled for smart contract operations(log events), be enabled for staking and the single parameter -superstaking sets these three parameters. The first time launching with -superstaking the wallet will rescan the blockchain to rebuild the database to add the address index and log events.

Next, the wallet will prompt to be restarted as a Super Staker using Settings – Options – Enable super staking and OK to restart the wallet. 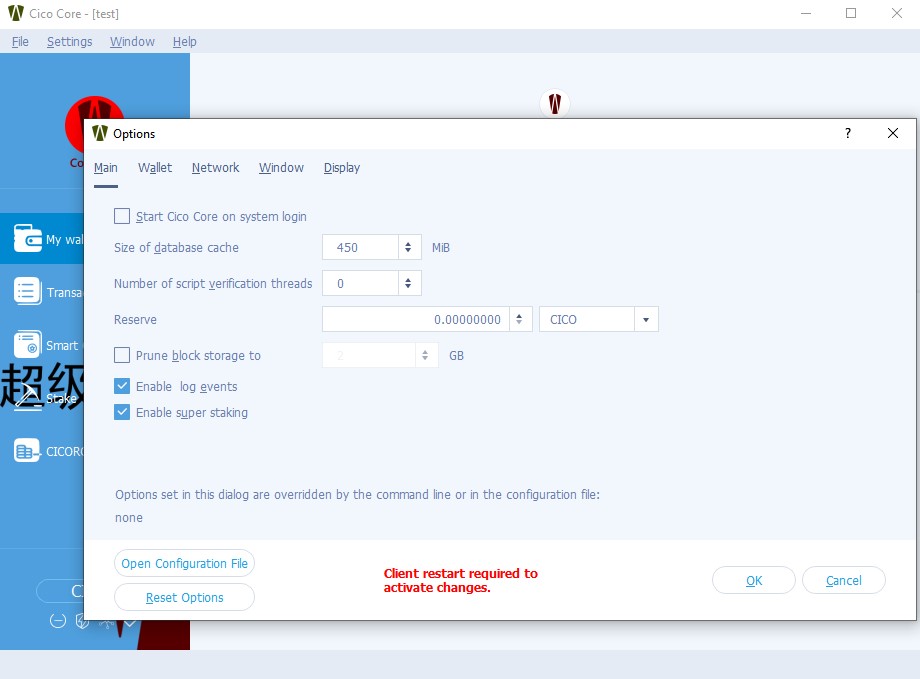 On startup, the wallet will confirm that you want to scan and rebuild the database.

The wallet will show “Reindexing blocks on disk…” and “Syncing Headers” while it rebuilds the database, this may take several tens of minutes depending on your computer.

After launching, go back to the Stake – Super Staking page and select the “Configure super staker” button (the gear symbol will now be visible) to compete the Super Staker configuration. Click the Custom box to see the default recommendations (shown below) or customize the setup. Click OK to complete the setup. 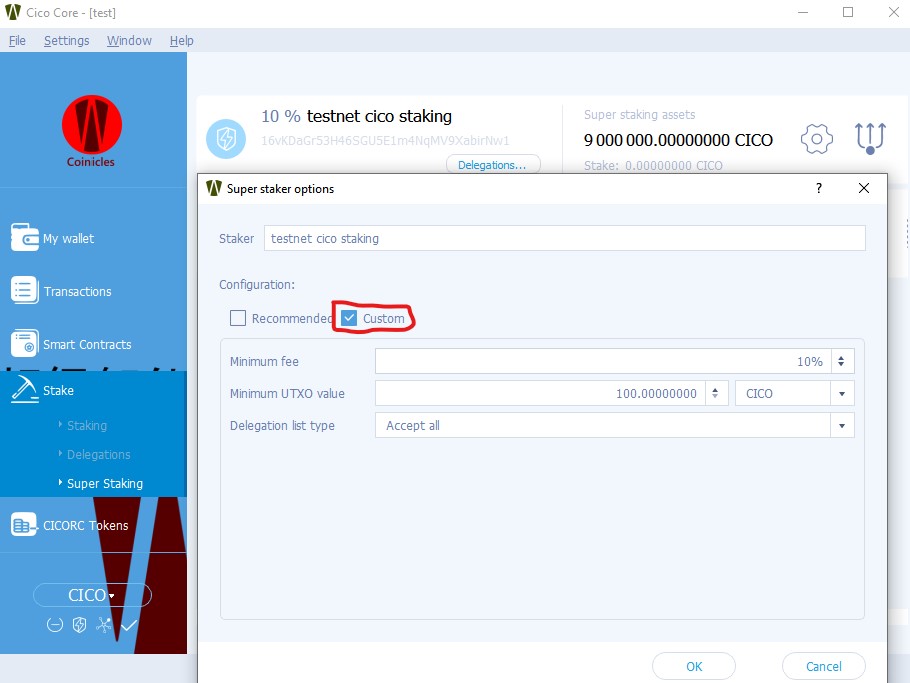 The configuration settings are:

Next, split the UTXOs to valid amounts for committing stakes by the Super Staker. The UTXOs must be a minimum amount of 100 CICO. On the Super staker page select the split coins button (trident icon) and use the default values or make adjustments, but no UTXOs under 100 CICO will be used for staking. 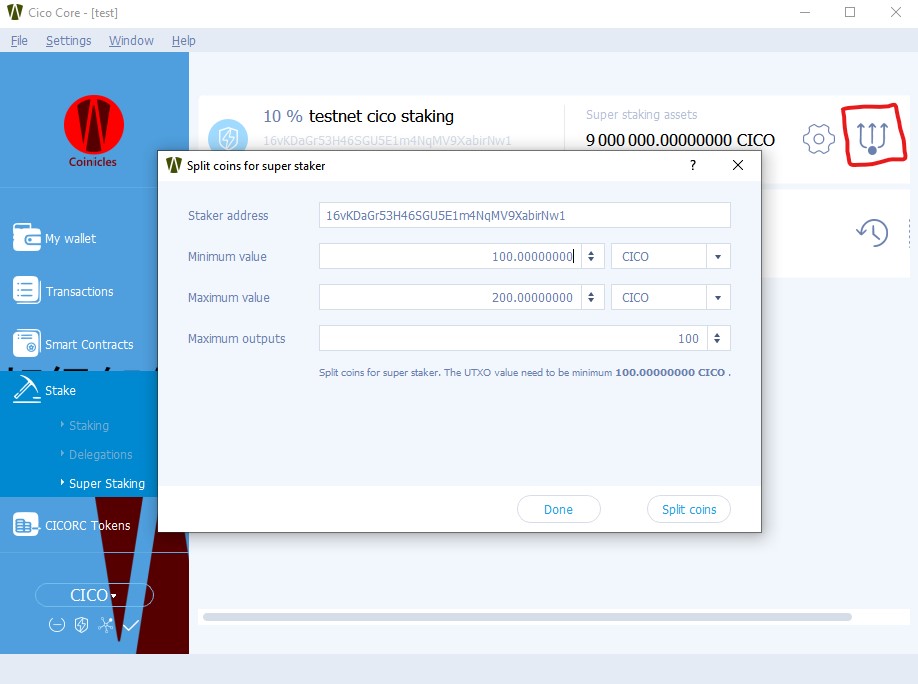 You can also split UTXOs with the splitutxosforaddress command, which can be used for delegated addresses as well. To split the UTXOs between a minimum and maximum value, enter the command:

Previously you could use the sendmanywithdupes command but that took significant formatting and operationally you would want to send to a new address. Of course, after either of these commands, the UTXOs must mature for 500 confirmations before they can be used for staking.

The above steps show the transition from a default installation Cico Core wallet to a Super Staker. The wallet may also be initially launched as a Super Staker to shorten the steps. In this case, the initial blockchain sync is accompanied by building the database for address index and log events (as discussed above) so the wallet is all ready for Super Staking.

The Cico Core wallet may be launched as a Super Staker with Cico-Qt using Settings - Options – Main – Enable super staking steps as shown above, or directly through the command line using the -superstaking parameter (testnet shown here).

This command for the default program directory on Windows would be:

The following setup for cicod shows the use of a single Super Staker address.

After installing cicod, launch with the following parameters (testnet shown):

Optional parameters may be added to change the default fee (of 10%) and minimum UTXO value (of 100 CICO), for example as:

Once the wallet syncs the blockchain, get an address to send some CICO. This will be the Super Staker address. Use the command:

This 1,300 CICO will arrive in a single UTXO, which must be split for the Super Staker operation. Use the splitutxosforaddress command with the default 100 minimum size and 200 maximum size:

The command response shows that 1,300 CICO were selected for splitting, in this case splitting into 12 UTXOs which can be seen with the txid on the Explorer.

At this point, the cicod wallet is ready for Super Staker operation with address CdMp2BNpwL6ZmMEQHfLV5wGNVgmPCuzd7d, and delegations can be monitored using the command:

Super Stakers should monitor their Wallet weight (UTXO weight minus amount currently staking) and add UTXOs if it drops below several thousand. 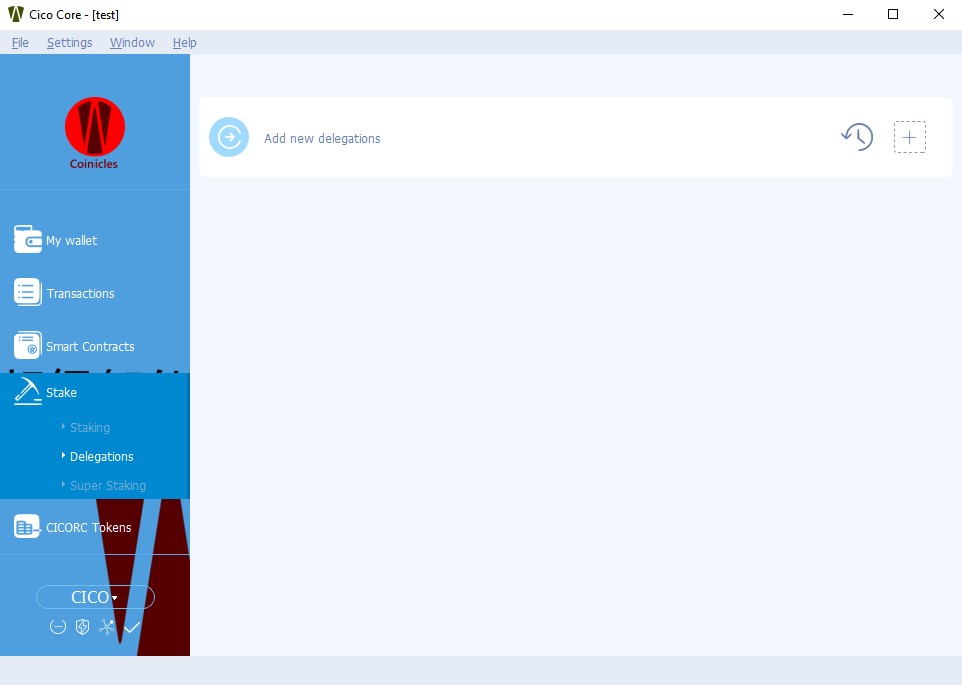